Through the eyes of a night snow maker

Why work the night shift

The employees who work outside represent a large part of the workforce at Mont SUTTON. Without them, the customers would not get to enjoy the Purely SUTTON experience. In the operations team, there is a job position that is one of the first to get into action before the beginning of the ski season. Here’s a hint: these employees make sure that despite the weather, the slopes are covered with snow.

To follow up on our last article, here is a typical day at work for Paul Santerre, who’s our night snowmaking team supervisor. He’s been a snow enthusiast for many years. What he likes most about his job is “the quietness of the night since there’s no one around. Also, the view from the top of chairlifts II and IV is just magnificent. On clear nights with a full moon, you can even see Montreal in the distance.”

It really makes you want to dress up for the task and spend the night working alongside him until the wee hours to see a sunrise with hints of orange and pink.

A typical night at work

So, what does a snowmaker’s job really look like? We enjoy the fruits of their labor the next day without even imagining what their work really consists of. Even if for Paul Santerre “it’s not a job to make snow”, snowmakers must be ready to face the cold and work with water. The season usually starts in mid-November and ends, depending on the weather, in January or February. After the intensive snowmaking season, snowmakers can be found working in various positions on the mountain like in lift operations.

His day usually begins just before 8:00 p.m. with a “briefing” from the day shift supervisor, during which they discuss what was accomplished by the day crew, what tasks remain to be done and what are the priorities for the night. No two nights are alike! Once the meeting is over, he assigns his team members their tasks for the night. The night snowmakers work in two teams: the summit crew and the base crew. The base crew operates the lifts to get the summit crew up the mountain. Until midnight at the latest, it’s what we call the “big move” during which all snowmakers work at positioning snowguns and preparing the equipment according to the snowmaking plans for the night. Once all is set and snowguns are blasting, employees from the summit crew will walk down the ski trails, in areas where snowmaking is in progress, 2 to 5 times during the night depending on the challenges encountered. During their inspections, the employees make sure that the snowguns are not buried in snow and they will change the direction of the snowguns as needed or according to the snowmaking plans. Of course, the quality of the snow produced is constantly monitored. As for the base crew, they check the snowguns at the bottom of the slopes and make sure the pumps and compressors are working properly. They roll and store hoses, not an easy task to do when everything is frozen! They make sure the snow production is as efficient as possible. “It’s not for everyone to work at night, outside, at -30°C,” says Paul Santerre, but for him it’s something he particularly appreciates!

In case of breakdowns or technical problems – some areas on the mountain are more problematic due to wind or frost for example – the snowmakers are responsible for finding a solution. With the investments made in recent years to improve the snowmaking system, “we are more efficient than ever,” says Paul Santerre. That being said, resourcefulness remains the key to being a good snowman “A good snowman adapts to what he has to do because when it’s urgent… it’s urgent!”

As for Jocelyne Trudeau (see the article through the eyes of Miss Météo), working at Mont SUTTON is also a family story for Paul Santerre. His father held a position in the operations team for more than three decades and that is why Paul decided to be part of the SUTTON family as well. He started as a parking attendant when he was only 13 years old and then moved to the lifts and finally to snowmaking. After taking a break and starting his own business, Paul Santerre is now back with us full time in the winter and part time in the summer as a lift operator. Yes, it is possible to combine more than one job at the mountain and even more so now that Mont SUTTON offers activities all year round!

At the time of publishing this article, we have just filled all the positions in the snowmaking team. Although, if you have the ideal profile for the job, send us your resume, who knows! If not, you should know that we have a wide range of positions to fill at the mountain in several departments!

Psst! You would like to know more about the investments that have been made specifically for the snowmaking system and ski slope maintenance, which represent a sum of $5M since the acquisition of the resort by the new owners in 2016, we invite you to read our blog post on the subject! 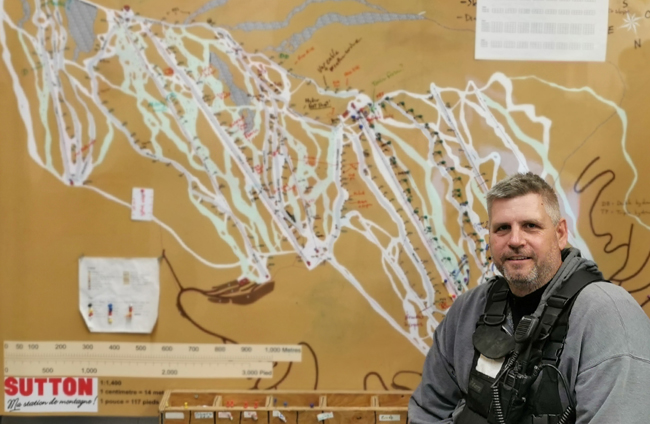 Through the eyes of Miss Météo

Through the eyes of a member of the restauration team

Through the eyes of the intern

Through the eyes of a rental service agent

Through the eyes of a chairlift operator